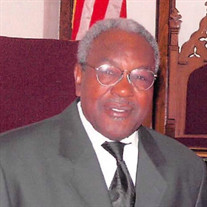 The oldest of seven children, Henry Crosson Jr. was born Wednesday, October 12, 1932, in Sumter, South Carolina, son of the late Henry Crosson Sr. and Sarah (Hunter) Crosson. At eighty-eight years of age, on Sunday, October 18, 2020, at his home in Hummelstown, Pennsylvania, Henry departed with the angels to enter eternal rest. Henry’s family eventually migrated north to Pennsylvania. As he grew into manhood, he became the family patriarch and was admired for his quiet demeanor, tender spirit, undeniable wisdom and strong work ethic. He retired from Olmsted Air Force Base in Middletown, Pennsylvania. While working full-time there, he pursued entrepreneurial desires and started Crosson Lawn and Snow Removal Service which he expanded to also include three industrial dump trucks. This successful business venture enabled him to secure subcontracting opportunities with the Commonwealth of Pennsylvania as a minority-owned business, and he subcontracted with several prime contractors on state highway construction projects. He was proud to point out to his children and others the many projects that he worked on throughout Pennsylvania. The Crosson–Hunter family was known throughout the Harrisburg area for their Annual Pig Roast Reunion that spanned four decades. In those forty years, Henry blessed every occasion with his opening prayer as family and friends formed a circle around him to bless their individual and collective journeys and for the yearly picnic that brought so many together from across the country. His heartfelt prayers echoed from the spirit of the ancestors to all the generations down through the years. The event became his platform for recalling oral and unwritten family history and his podium for sharing an encouraging word. Henry was a faithful servant of God and assumed his spiritual nobility with unwavering faith. He was a devoted and active member of Mt. Zion Missionary Baptist Church, Steelton, Pennsylvania, where he served for over fifty years. He joined Mount Zion on January 27, 1952, and was baptized on February 3, 1952. Ordained a Deacon on December 1, 1968, he served as Chairman from 1977 until 1981. He was the visionary and a founding member of the Concerned Men’s Ministry and the Laymen’s Ministry that supported the pastor and church spiritually. The group also completed many building improvements; spearheaded the purchase of the first church van which provided transportation for many events; and, sponsored fundraising campaigns such as the annual Farm Show concession stands. He was honored for his distinguished service by the Deacon and Deaconess Boards in 2008. He was named 2009 Layman of the Year for his outstanding service to the Laymen’s Movement of the Central Baptist Association. Deacon Crosson completed course work offered by the Sunday School Publishing Board of the National Baptist Convention, USA, Inc., receiving a certificate in “Standard Leadership Curriculum.” He enjoyed watching all types of sports, loved gardening and travelling with his wife Barbara. He had a signature style of his own when it came to clothes and that appearance was further enhanced with his unique wit and sense of humor. One of his greatest pleasures was sharing his divinely-anointed wisdom and lessons of life with the younger generations of the family. He took extreme joy in letting you know the rewards of hard work and living upright and godly. There were no degrees behind his name, but he was a professor of life who exemplified the adage that it was better to see a sermon than to hear one. Henry humbly displayed the profound difference between being educated and being wise. In August 2013, at Whitmore Park in Annapolis, Maryland, officials unveiled a memorial honoring the “foot soldiers” who attended the historic 1963 March on Washington with the late Dr. Martin Luther King Jr. to commemorate the fiftieth anniversary of the March. Among those who endured the heat, threats and harassment to march in 1963 was Henry, and his name is one of the five-hundred “foot soldiers” etched on the three slabs of memorial granite. Henry loved and made sacrifices for his entire family. He has a daughter, April; and was formerly married to Joyce (Andrews) Crosson, a union that was blessed with three children, Tracy, Debra and Darrell. In 1996, he united in matrimony with Barbara (Benton) Crosson, his wife of twenty-four years, and she had three children, Stacey, Randy and Lyndelle. Henry was preceded in death by his parents, and brothers, Elliott Crosson, Joseph Crosson and Isaac Crosson. Surviving to honor his legacy are his loving and devoted wife Barbara of Hummelstown, Pennsylvania; his brothers: Richard Crosson (Marilyn) of Maryland, and Nathan Crosson of Harrisburg, Pennsylvania; his sister, Evelyn Crosson Chisholm of Harrisburg; his children: April Sims, Tracy Crosson Brown (William Sr.), Debra Crosson Allen (William Sr.), all of Harrisburg, and Darrell Crosson of Philadelphia, Pennsylvania. He also leaves to celebrate his life three children from his union with wife Barbara: Stacey Benton Hughes (Walter) of Harrisburg, Randy N. Benton (Haruko) of Camp Zama, Japan, and Lyndelle Butler (Wallace II) of Harrisburg; his beloved grandchildren: Quinton Crosson Taylor (Alicia) of Raleigh, North Carolina, Alfonse Sims, William Allen Jr., Marjia Allen, Elyssia Taylor, Wallace Butler III, all of Harrisburg, D’vonte Sterling of Surprise, Arizona, Brandon Benton and Shawn Benton of Camp Zama, Japan; his great-grandchildren: Jacob Quin Taylor, Diana Joy Sheraden Taylor and Jin Kato; his only living aunt, Harriett Hunter White of Baltimore, Maryland; and a host of nieces, nephews, cousins and friends who mourn his passing, but rejoice and celebrate his life and legacy. FAMILY AND FRIENDS ARE ENCOURAGED TO CLICK ON THE SHARE A MEMORY TAB TO POST VIDEOS, SHARE MEMORIES, CONDOLENCES, REFLECTIONS OR SIMPLY YOUR NAME ALLOWING THE FAMILY TO KNOW YOU ARE THINKING OF THEM. ON-LINE STREAMING OF SERVICE. CLICK ON THE PHOTOS & VIDEOS TAB OR MEDIA TAB (MOBILE) AND TRIBUTE WEBCAST TO VIEW.

The family of Henry Crosson Jr. created this Life Tributes page to make it easy to share your memories.

Send flowers to the Crosson family.