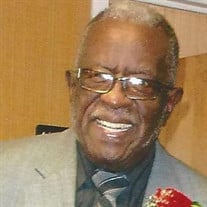 Harry, son of the late Evanson Dawson and Leila Alston Wiley, was born in Sumter, South Carolina, on Monday, March 26, 1934. Harry spent his early years in Sumter, where he was educated in the public schools. In 1953, Harry moved to Steelton, Pennsylvania. He worked as a metal worker at Abrams Scrap & Steel in Harrisburg, and retired after thirty years of dedicated service. He was united in Christian fellowship with the Beulah Baptist Church for over sixty years. Harry loved singing. He blessed the congregation at Beulah through his service on the Senior Choir, Men’s Chorus and Sanctuary Choir. He also served as a Trustee and Trustee Emeritus. In the community, he blended his melodious baritone voice with members of the United Ma-leers and the Capital Area Music Association. Harry had a God-given gift of fun and laughter. He was very witty and had a great sense of humor – he could make anyone laugh! Harry was simply fun to be around; and, in turn, he loved to be around his family and friends. Some of Harry’s most special moments were spent listening to gospel music, going to movies, eating out, traveling on the church’s bus trips to the flea market in Englishtown, New Jersey; and, without a doubt, enjoying his favorite foods – fried chicken and baked macaroni and cheese. On the morning of Wednesday, January 9, 2019, at the age of eighty-four, Harry transitioned from this life joining in eternal life his parents, three brothers, Fred Alston, Charles Wiley and Sylvester Dawson; four sisters, Sylvia-Ann Alston Thompson, Lilly Mae Dawson, Ruth Alston and Shirley Holmes Thompson, and other loved ones. He leaves to share and cherish many special memories, his caregiving niece and nephew, Diane Williams (Kenneth) and Darrell Holmes; two sisters, Beulah Floyd and Alberta Wade (Horace); one brother, Isra Dawson; one sister-in-law, Lou Ella Dawson; his best friend, Ezekiel Curtis; as well as a host of nieces, nephews, cousins, other relatives and friends. Giving God all the Glory, Honor and Praise... Lovingly submitted by the Family of Mr. Harry Alston

Harry, son of the late Evanson Dawson and Leila Alston Wiley, was born in Sumter, South Carolina, on Monday, March 26, 1934. Harry spent his early years in Sumter, where he was educated in the public schools. In 1953, Harry moved to Steelton,... View Obituary & Service Information

The family of Mr. Harry Alston created this Life Tributes page to make it easy to share your memories.

Send flowers to the Alston family.