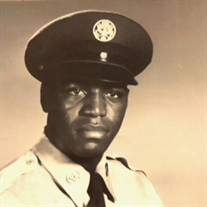 Harding Brown, affectionately known as “Brownie,” son of the late Linn Brown and Lula B. “Kute” Brown, was born Thursday, April 15, 1937. Harding was a man who was proud of his family, the Dallas Cowboys, and proud of his hometown, Steelton, PA. So, it is befitting that his resting place should be here in the Harrisburg/Steelton Area. Harding was a stellar athlete in basketball, football and track, in which he broke and set many records. (If you had the time to hear it all, believe you me, he would share his stories with you.) He was the recipient of various honors and awards. Upon graduating from Steelton High School, Class of 1956, he enlisted in the United States Air Force. He faithfully served his country and received an honorable discharge in September of the year 1961. On Friday, July 9, 2021, Harding departed this life. He leaves to mourn his death: his wife, Lola Brown; five daughters, Carla Tatum, Nadine Tatum, Sharon Tatum-Belle, Paula Tatum, Kimberly Tatum; one son, Dale Brown; grandchildren, great-grandchildren; one brother, Henry Brown; two sisters, Ardelia Washington and Shirley Wright (Isaac Wright); and a host of other relatives and friends. FAMILY AND FRIENDS ARE ENCOURAGED TO CLICK ON THE SHARE A MEMORY TAB TO POST VIDEOS, SHARE MEMORIES, CONDOLENCES, REFLECTIONS OR SIMPLY YOUR NAME. CLICK ON THE PHOTOS & VIDEOS ON-LINE STREAMING OF SERVICE TAB OR MEDIA TAB (MOBILE) AND TRIBUTE WEBCAST TO VIEW SERVICE. IF ATTENDING, MASK IS REQUIRED.

The family of Harding Brown created this Life Tributes page to make it easy to share your memories.

Harding Brown, affectionately known as “Brownie,” son of the...