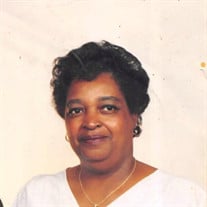 Geraldine Durham Harfield was born Tuesday, October 19, 1948, in Johnstown, PA, daughter of the late Charles Durham Sr. and Nona Jackson-Durham. As a young adult, she was a 4-H leader, loved plants and was actively engaged in her community for her entire life. As a child, she would play with a neighborhood boy and good friend of the family, Samuel “Danie” Harfield who would constantly tease Geraldine, by pulling her pigtails. On August 23, 1969, her childhood playmate became her life partner. She married Danie, the love of her life, and together, they had three daughters-- Dana, Aleshia and Kristen. As her girls were growing up, Geraldine volunteered as an assistant Girl Scouts leader, and she was affiliated with the American Legion Auxiliary - Post 1001. Growing up, Geraldine was affectionately known to all of her family and friends as “Chee Chee”. However, when she became a grandmother, she created the name “Gigi” for herself. She once said, “I’m too young to be a grandmother.” From that time on, all who knew her knew her as Gigi. Gigi graduated from Johnstown Senior High School, Class of 1967. She later finished her studies at Cambria Rowe Business School. In the world of work, she worked as an assistant manager with Piece Goods fabric store (before it went out of business) and later grew as an entrepreneur when she became co-owner, along with her husband, of PG Cleaning in Steelton, PA. She also retired from Merck-Medco in Mechanicsburg, PA. Multi-talented, Gigi had a natural gift for sewing. A self-taught fiber artist, Gigi became a professional seamstress, sewing many formal gowns, including prom and bridal formal wear. Gigi could do so many things. She filled her time enjoying gardening, cooking, and baking. She especially enjoyed each time she had the opportunity to decorate birthday and wedding cakes for her loved ones. Most of all, she enjoyed caring for her immediate and extended family. On Tuesday, December 8, 2020, at 72 years of age, and with her husband of 51 years by her side, Geraldine transitioned from time to eternity joining her parents and her brother, Cooper Sheffield. She leaves behind, to cherish irreplaceable memories, her husband, Samuel Harfield; three daughters, Dana Harfield, Aleshia Harfield, Kristen Harfield; grandchildren, Cierria Harfield, Jerel Harfield, Quentin Chacon, Cameron Harfield, Amillio Chacon, Dimitri Chacon, Gabriella Punter; great-grandchildren, Karter Harfield, Alizah Harfield; brothers, Charles Durham Jr. (Delores), Edward Durham (Star), David Durham (Roxann); and a host of nieces, nephews and other family members and friends, all of whom Gigi loved dearly. Geraldine “Gigi” Harfield will return home to Johnstown, PA for her final resting place and will be buried close to her parents in the Richland Cemetery. FAMILY AND FRIENDS ARE ENCOURAGED TO CLICK ON THE SHARE A MEMORY TAB TO POST VIDEOS, SHARE MEMORIES, CONDOLENCES, REFLECTIONS OR SIMPLY YOUR NAME ALLOWING THE FAMILY TO KNOW YOU ARE THINKING OF THEM. ON-LINE STREAMING OF SERVICE. CLICK ON THE PHOTOS & VIDEOS TAB OR MEDIA TAB (MOBILE) AND TRIBUTE WEBCAST TO VIEW. PUBLIC VIEWING; FAMILY PRIVATE SERVICE

Geraldine Durham Harfield was born Tuesday, October 19, 1948, in Johnstown, PA, daughter of the late Charles Durham Sr. and Nona Jackson-Durham. As a young adult, she was a 4-H leader, loved plants and was actively engaged in her community... View Obituary & Service Information

The family of Geraldine Durham Harfield created this Life Tributes page to make it easy to share your memories.

Send flowers to the Harfield family.