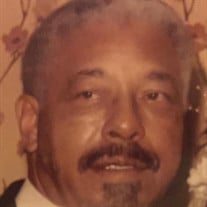 George Nathan Penn Sr. was born on Sunday, December 3, 1933, in Pilot Mountain, North Carolina, to the late Lott and Irene Penn. The second eldest of eight children, Nathan spent his early years in Pilot Mountain, North Carolina, playing with his brothers, Alfonzo and John L. Seeking a better quality of life for their family, Lott and Irene Penn brought their children to Pennsylvania where they eventually settled in the Harrisburg Area. Nathan attended Vernon Elementary School and completed his formal education in the Harrisburg School District. Nathan married the love-of-his-life, Bessie Ross, on Valentine’s Day in 1952. Bessie preceded him in death in June of 1998. Prior to his marriage, Nathan found and accepted Jesus Christ as his Lord and Savior and soon became a member of Greater Zion Baptist Church in Harrisburg, PA, under the leadership of the late Pastor Clarence L. Henderson. Nathan and Bessie’s union was blessed with three children, Deborah Lewis, Tonya Penn-Harper and George Nathan Penn Jr. Nathan’s children and grandchildren were the pride of his life. Later in life, Nathan was blessed with the opportunity to be a father figure and grandfather with his faithful and devoted companion Gerri Mott, and her son Charles James Mott III. George, as he was often called in some circles; in others, Nathan; and in many circles, he was referred to as “RED MAN,” was known for being a hard-working man. He was fortunate to enjoy the friendships of many people. Nathan enjoyed and loved his family and family gatherings. He enjoyed life and was a man of few words. However, when he spoke, his words were powerful, full of wisdom and good advice. Everyone loved Uncle Nathan. An avid hunter, Nathan enjoyed small and big game hunting. You could often find him cleaning his guns and watching his cowboy movies early on Saturday mornings. During his early employment years, Nathan worked in the Construction Industry where he helped build many of the major bridges throughout the State of Pennsylvania. While working in the Steel Industry, he was also an independent contractor with the family janitorial business, working in many of the State buildings throughout the City. Nathan Penn eventually retired from Harrisburg Steel Mill after over twenty years of service. Thereafter, he enjoyed his retirement living with his son, George Nathan Penn Jr. and his family in Delaware for the past twenty years. Nathan enjoyed a peaceful quality of life surrounded by his family, children, grandchildren and friends. In Newark, DE, at eighty-seven years of age, George Nathan Penn Sr. transitioned on Wednesday, April 14, 2021, joining in eternal life his parents, his wife, his daughter, Charlene Mott-Harris, four brothers, John L. Penn, Lonnie R. Penn, James Lee Penn, Alfonso Penn, and two sisters, Virginia M. Eichelberger and Lannie Penn. George Nathan Penn Sr. leaves to celebrate his life: his sister, Varline Penn-Carter of Harrisburg, PA; his children, Deborah Lewis and her husband Hollis Lewis of Savanna, Texas, Tonya Penn-Harper of Philadelphia, PA, George Nathan Penn Jr. and his wife Claudia Penn of Newark, DE, Charles James Mott III and his wife Alesia Mott of Auburndale, and Belinda Penn of New Castle, DE. Nathan also leaves his grandchildren, Toya, James, Tiffany, Kyndall, Evan, Dante, Shalanie, Michael, Julius, Desmond, Tiara, Solomon, Nichelle, Daniell, Darnell, Charles James Mott IV (Chaz), CharRayKapre, Brian Harris, Gerald Harris; forty great-grandchildren, two great-great-grandchildren, and a host of cousins, nieces, nephews and good faithful friends. FAMILY AND FRIENDS ARE ENCOURAGED TO CLICK ON THE SHARE A MEMORY TAB TO POST VIDEOS, SHARE MEMORIES, CONDOLENCES, REFLECTIONS OR SIMPLY YOUR NAME. CLICK ON THE PHOTOS & VIDEOS ON-LINE STREAMING OF SERVICE TAB OR MEDIA TAB (MOBILE) AND TRIBUTE WEBCAST TO VIEW SERVICE.

The family of George Nathan Penn Sr. created this Life Tributes page to make it easy to share your memories.