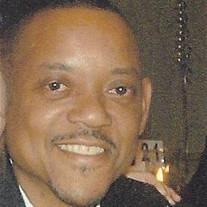 ~~~~~~~~~~~~~~~~~~~~~~~~ “To everything there is a season and a time to every purpose under the Heaven.” Ecclesiastes 3:1 ~~~~~~~~~~~~~~~~~~~~~~~~~~ A Time to be Born: Gary, the youngest of four siblings, was born on Thursday, November 9, 1961, at the Harrisburg Hospital, Harrisburg, PA, to his loving parents, the late Willie Gaston and the late Maggie Stroud-Gaston. A Time to Learn and Work: Gary attended the Harrisburg School District and received his high school diploma from Harrisburg High School, Class of 1980. He was employed by AMP Corporation for several years before retiring because of the company closing. He established his own company, “Gaston Auto Detailing,” as well as working in the family business, “Preferred Janitorial Services,” alongside his father, brother, cousin, other family and neighborhood friends who were in need of a job. A Time for Family and Friends: Gary was blessed with three children, Tara, Shannon and Gary Jr., in addition to his stepson, Ronald Brundage III. Gary was very popular among his friends and co-workers. His smile would light up a room and leave you feeling better about whatever trials and tribulations you may have had. He was an avid gardener and fed many in the neighborhood with his homegrown broccoli, greens, cucumbers and cabbage (some the size of basketballs). He loved all athletics, especially the Dallas Cowboys. He also enjoyed watching women athletics. You could also find him at Hollywood Casino looking for his favorite machine. In his younger days, you could find him in the basement playing the drums and singing along with his other friends. He cared deeply about his family and spent countless hours checking on them. Many weekends were spent frying fish and cooking out at the Gaston compound. Gary will always be remembered for his zest for life, work ethics and charismatic personality. A Time to Die: Gary departed from his earthly shell to be returned forevermore to his Heavenly Father on Sunday, June 23, 2019, at the age of fifty-seven, to be reunited with his mother, father and sister, Diane Griffy, who we are sure greeted him with opened arms. A Time to Mourn: Gary leaves to celebrate his life devoted children, Tara, Shannon and Gary Gaston Jr.; his devoted companion, Jennifer Buzby, who stood by him through thick and thin; his brother, Jerome L. Gaston Sr. (fiancée, Wanda Jefferies); sister, Lovella Burhannon; an aunt, Willa Mae “Tot” Stroud; adopted brother, Dr. Alvin Cook; special cousins, Marie Bowers (Donald), Debbie James, Wanda Rucker (Billie), Karen Anderson (Marlin); nieces and nephews, Shawntè Arrington, Jerome Gaston Jr., Taylor Gaston, Denisha White (Shawn), Lisa Griffy, Chinwè S. Maponya-Cook; three great-nephews, three great-nieces, cousins, other relatives and friends. Submitted with our Everlasting Love, The Family Memorial gifts may be made to the ALS Association, 321 Norristown Rd. #260, Ambler, PA 19002

The family of Mr. Gary G. Gaston created this Life Tributes page to make it easy to share your memories.

Send flowers to the Gaston family.