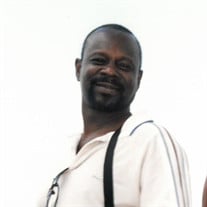 Fred Hubert Danzey Jr., the son of the late Fred H. Danzey Sr. and Lucille Jackson, was born on December 12, 1953 in Vero Beach, Florida. He entered eternal rest at Hershey Hospital on Sunday, September 20, 2020. Fred graduated from Boys and Girls High School in Brooklyn, New York. He was actively involved in playing basketball and was offered a scholarship from Syracuse University. He was a licensed CDL driver for 40 years and received many awards for his impeccable driving skills. Fred was known for his famous line "Maintain Your Lane", and for being bossy while others drove. Fred enjoyed fishing, sports, music, cooking, baking, being outdoors, drawing, and loved...loved -crime dramas and action movies. Fred was a man of not many words, but when he spoke to you "You Listened" to what he had to say. He was a dedicated husband to Denise, and dependable father to Jamal and Amyla. Fred was a loving son, brother, and uncle to many. He leaves to mourn his loss: his wife Denise Danzey, son - Jamal Chase, daughter - Amyla Danzey, and goddaughter - Secora Edey, six sisters - Linda Thompson, Wyonna Battle, Patricia Jordan, Barbara Danzey, Leisha Washington (Mike), and Althea R. Danzey - Taylor (Carmichael), and four brothers - Garrett Danzey, Terrence Danzey (Tonya), Michael Jackson, and Greg Jackson, and a host of nieces and nephews and close friends. Fred was preceded in death by his parents Lucille Jackson, Fred H. Danzey Sr. and Carrie L. Danzey, as well as his sister Frederina E. Danzey and his brother Kenneth Jackson. A PRIVATE MEMORIAL SERVICE WILL BE HELD FROM 11 A.M. TO 12 P.M. AT THE FUNERAL HOME ON TUESDAY, SEPTEMBER 29, 2020. FAMILY AND FRIENDS ARE ENCOURAGED TO CLICK ON THE SHARE A MEMORY TAB TO POST VIDEOS, SHARE MEMORIES, CONDOLENCES, REFLECTIONS OR SIMPLY YOUR NAME ALLOWING THE FAMILY TO KNOW YOU ARE THINKING OF THEM. Memorial gifts in Fred’s name may be made to the American Cancer Society P. O. Box 42040, Oklahoma City, Oklahoma 73123

The family of Fred Hubert Danzey Jr. created this Life Tributes page to make it easy to share your memories.

Send flowers to the Danzey family.