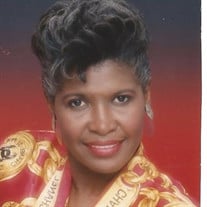 Frances Arlene Scott, daughter of the late William James and Frances Velma Scott, was born Saturday, August 16, 1947, at University Hospital, Baltimore, MD. She was educated in the Harrisburg City School System having graduated from the former John Harris High School with the Class of 1965 and Empire Beauty School. Frances’s adventurous nature led her to pursue employment in the Washington, D.C., area as soon as her father permitted. She began her working career with the federal government at Indiantown Gap in the clerical series and later relocated to Washington, D.C. in 1966 to continue her career. In the years that followed, Frances worked in a number of National Headquarters’ Offices to include General Services Administration, Internal Revenue Service, US Customs Service, Defense Mapping Agency, and the State Department. She held a variety of administrative positions and served on task forces which enabled her to function as a liaison between professional and clerical staff and serve as a hostess to foreign dignitaries. At the end of her thirty-year career with the federal government, Frances had worked for a total of twenty-six agencies. Frances was actively involved in both her church and civic communities. At the age of fourteen, she joined Second Baptist Church under the leadership of Reverend J. B. Williams. In her adult years, she became the Church Secretary, Historian, and served on the Senior Usher Board. She later joined The Greater Zion Missionary Baptist Church under the leadership of Rev. Dr. Charles R. Meile Jr. where she continued to serve God by becoming active in a variety of ministries. Within the civic community, Frances served as the secretary for the Schreinerstown Civic Association and the American Business Women’s Association, Blue Mountain Chapter. In her later years, Frances truly enjoyed early morning social gatherings with her friends at McDonald’s in the Seventh Street Plaza and frequenting the local thrift shops in search of undiscovered treasures. Frances Arlene Scott departed this life on Sunday, January 6, 2019. She is survived and will be sorely missed by her daughters Diane (Keith) and Della (David); her grandsons, Kristofer (Kalimba), Malyk, and Dashaun; granddaughter Devyn; as well as many other family members and friends.

Frances Arlene Scott, daughter of the late William James and Frances Velma Scott, was born Saturday, August 16, 1947, at University Hospital, Baltimore, MD. She was educated in the Harrisburg City School System having graduated from the... View Obituary & Service Information

The family of Ms. Frances Arlene Scott created this Life Tributes page to make it easy to share your memories.

Frances Arlene Scott, daughter of the late William James and...