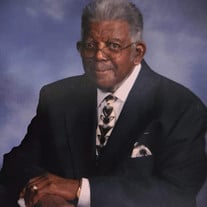 A beautiful, productive and well-spent life came to a close on this earth on February 12, 2021 when Ferman Bernard Moody was called from his earthly home to his heavenly home. Dr. Moody was the youngest of eleven children born to the late Rev. Fountain and Mary T. Moody, on a small tobacco farm in Charlotte County, Red Oak, Virginia on May 28, 1933. He accepted Christ as his Lord and Savior at the young age of six and he was baptized and united with the St. Level Baptist Church in Red Oak, Virginia. On August 22, 1956, Ferman was united in holy matrimony to his long-time high school and college sweetheart, Mattie E. White Moody. They enjoyed sixty-three happy years of a loving and caring marriage until the very end. Dr. Moody completed his early education in the public schools of Charlotte County, Virginia and earned a B.S. Degree in Agricultural Education from Virginia State University in 1956. He received his Masters Degree in Education from the University of Virginia in 1965, and his Doctorate Degree in Educational Administration and Research from the Penn State University in 1967. After having served honorably for two years in the United States Army, Dr. Moody and Sister Mattie established their first home in Franklin County, Rocky Mount, Virginia, where he taught agriculture in the public schools of Pittsylvania and Franklin Counties for six years. In 1962, Dr. Moody was named the “Outstanding African American Teacher of Agriculture” for the State of Virginia. Dr. Moody served as Pennsylvania’s Assistant Commissioner for Elementary and Secondary Education, as Director of the Research Coordinating Unit for Vocational Education, and as Director of the Bureau of Special and Compensatory Education. He further served as a Higher Education Consultant in the Pennsylvania Department of Education where he gave valuable curricula advice and guidance to twenty-three colleges and universities in Pennsylvania for the preparation and accreditation of teachers. During that time, he was also an Adjunct Associate Professor for Education at the Penn State University, Middletown Campus. Dr. Moody was a strong, dedicated, caring and active member of The First Baptist Church of Steelton where he was ordained as a Deacon in February 1970. In addition to his work on the Deacon Board, where he served Chairman in the 1970’s and for two other terms after the 1990’s, he served actively on the Budget and Finance Committee, the Music Committee, and the Charles M. Donahue Men’s Chorus. Dr. Moody leaves to cherish a lifetime of wonderful memories his wife, Mattie E. (White) Moody; two sisters-in law: Marian Bussie (Morris), Margaret Moody; and a host of nephews, nieces, great-nephews, great-nieces, and several other relatives, good neighbors, and dear friends. PUBLIC VIEWING, 10 A.M. - 12 P.M.; PRIVATE SERVICE, 12 P.M. INTERMENT WILL BE WEDNESDAY, FEBRUARY 24TH, 2021, IN CLARKSVILLE, VA. FAMILY AND FRIENDS ARE ENCOURAGED TO CLICK ON THE SHARE A MEMORY TAB TO POST VIDEOS, SHARE MEMORIES, CONDOLENCES, REFLECTIONS OR SIMPLY YOUR NAME. CLICK ON THE PHOTOS & VIDEOS ON-LINE STREAMING OF SERVICE TAB OR MEDIA TAB (MOBILE) AND TRIBUTE WEBCAST TO VIEW SERVICE.

A beautiful, productive and well-spent life came to a close on this earth on February 12, 2021 when Ferman Bernard Moody was called from his earthly home to his heavenly home. Dr. Moody was the youngest of eleven children born to the late Rev.... View Obituary & Service Information

The family of Dr. Ferman B. Moody created this Life Tributes page to make it easy to share your memories.

A beautiful, productive and well-spent life came to a close on...

Send flowers to the Moody family.