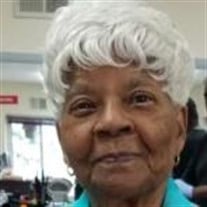 Estella E. Waters-Grigsby, daughter of the late George E. Waters and the late Katherine Bradley-Waters, was born Tuesday, January 17, 1928, in Harrisburg, PA. Estella was educated in the Harrisburg School District where in 1973 she completed requirements for her General Educational Development Diploma by attending Harrisburg Evening High School. In 1960, Estella graduated from the Ebony School of Beauty Culture and for a few years worked as a beautician. For a period of time, she worked for Pomeroy’s and Sears Department Stores located in Harrisburg, and also the Mechanicsburg Naval Supply Depot, Mechanicsburg, PA. Estella first married the late James Hill in 1944. Later, in 1960, she married Merle T. Grigsby who preceded her in death on July 16, 2018. Estella was a devoted housewife and was known by family and friends to have a very active mind working crossword puzzles and telling stories. She loved God, her church--Trinity Church of Harrisburg, her family and, especially, her name Estella. She allowed only family and friends to call her “Estel” and would quickly correct anyone by saying, “My name is Estella!” Estella loved to watch court judges and “The View” on television as well as cooking, eating and on Sunday mornings listening to gospel music from the “Echoes of Glory” broadcast. She had to have a lot of heat in her home; to you it may be warm, but to her it felt fine. At the blessed age of ninety-one, on Sunday, October 20, 2019, Estella E. Waters-Grigsby was called into eternal rest. She leaves to cherish and honor her legacy: son, Richard Hill of Pasadena, CA; sister, Lillian Stewart of Harrisburg, PA; daughter-in-law, Priscilla Hill of Pasadena, CA; two grandchildren, Rochelle Hill and Lydell Hill of Pasadena, CA; three great-grandchildren, Taea Hill of Albuquerque, NM, Donovan Hill of Covina, CA, Darby Lewis of Pasadena, CA; one great-great-grandchild, Ayla Hughes of Albuquerque, NM; other relatives and friends. Respectfully and Lovingly Submitted, The Family

Estella E. Waters-Grigsby, daughter of the late George E. Waters and the late Katherine Bradley-Waters, was born Tuesday, January 17, 1928, in Harrisburg, PA. Estella was educated in the Harrisburg School District where in 1973 she completed... View Obituary & Service Information

The family of Mrs. Estella E. Waters-Grigsby created this Life Tributes page to make it easy to share your memories.

Send flowers to the Waters-Grigsby family.