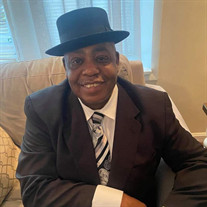 Ernest Wilson Harper, son of the late Ernest Wilson Harper Sr. and the late Helen Pierce Ellerbee, was born Friday, October 5, 1956, in Harrisburg, PA. Known as “Bossman” by family and friends, Ernest graduated from Harrisburg High School, Class of 1974. In 1982, he studied Business (Music) at the New School for Social Research, New York City; and in 1995, he studied Retail Marketing at Harrisburg Area Community College. Ernest’s employment and career path included Assistant Manager at Eddie’s Men’s Store, Harrisburg, from 1977 – 1980; Sales Associate at 5th Avenue Lord & Taylor’s, New York City, from 1980 – 1983; Parts Clerk at Sears from 1984 – 1986; owner and operator of Boss Corporation, a small business he started over two decades ago; and in his younger years, he worked in the community at the local YMCA. Ernest was united in Christian fellowship with Mount Calvary Church of God in Christ, Harrisburg, under the pastorate of Elder D. R. Gilmore. An involved people-person, Ernest was never shy when it came to conversing with anyone. He kept abreast of current and social issues. An avid reader, he especially enjoyed reading business publications and biographies. Ernest was always well-dressed in his stylish suits. Additionally, not to mention, he loved to cook and proved himself to be a very good cook. Ernest had a heart-of-gold expressed by the love he shared with his family and the commitments he made to his community. He was so proud of his children; there was nothing he wouldn’t do for his family. He made positive contributions to his community and was honored by the Mayor’s Office for his unselfish and benevolent efforts. He was known for his citywide cabarets, and on one occasion, he paid cash to a group of teenagers to pick up litter in the neighborhood. In Steelton, PA, on Friday, September 11, 2021, at sixty-four years of age, Ernest transitioned from time to eternity joining his parents and his sister, Cherry N. Thomas. Treasured memories will be shared by his daughter, Kabrina Johnson of Baltimore, MD; son, Kwame Dickson of York, PA; sisters, Audria Miller and Teresa Harper, both of Harrisburg, and Alicia Harper-Morris of Pensacola, FL; stepbrother, Rickey Robertson of Madison, AL; stepfather, Joseph Ellerbee of Pittsburgh, PA; as well as a host of nieces, nephews, aunts, uncles, cousins and friends. FAMILY AND FRIENDS ARE ENCOURAGED TO CLICK ON THE SHARE A MEMORY TAB TO POST VIDEOS, SHARE MEMORIES, CONDOLENCES, REFLECTIONS OR SIMPLY YOUR NAME. CLICK ON THE PHOTOS & VIDEOS ON-LINE STREAMING OF SERVICE TAB OR MEDIA TAB (MOBILE) AND TRIBUTE WEBCAST TO VIEW SERVICE.

The family of Ernest Wilson Harper created this Life Tributes page to make it easy to share your memories.

Send flowers to the Harper family.