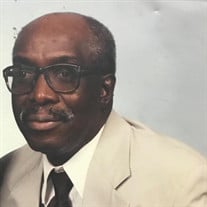 Ernest Jesse Green was born on Monday, September 8, 1930, in Berkely County, South Carolina, to the late Sarah and William Green. He received his formal education in the Berkely County Public Schools. At the age of seventeen, when his father passed away, Ernest and his brother Joe went to work to take care of his mother, younger sisters and brothers. At an early age, he accepted Christ as his personal Savior. He loved going to church and singing in the choir. Shortly, he would be drafted into the U.S. Army. He always came home on furlough and that's how he met the love-of-his-life, Mildred Carter. They were united in Holy Matrimony on October 11, 1955. This union was blessed with two sons. In 1958, after his Honorable Discharge from the U.S. Army, Ernest relocated his family to Harrisburg, PA. Once in Harrisburg, PA, he continued his faith and commitment to Christ and was an active member of St. Paul’s Baptist Church in Harrisburg for many years. He eventually found a new church home at The First Baptist Church of Steelton. He began working for Defense Logistics Agency, Mechanicsburg, PA, and retired with thirty-four years of honorable Federal Service. Ernest was an excellent craftsman and enjoyed remodeling his home as well as doing home improvements for others. He had a love for the outdoors and doing landscaping around his home. He was very proud to be a country boy from South Carolina and enjoyed talking about Moncks Corner and the people there. He also considered himself a Master Chef; and for him to tell it, he could burn. On Saturday, October 3, 2020, he transitioned from body to spirit at the loving home of his son and daughter-in-law. In addition to his parents, he was preceded in death by his wife, Mildred C. Green; four brothers, William, Joseph, Sam and Henry Green; three sisters, Victoria Tisdale, Dolly Green and Rebecca Burns; his grandson, Jerrell O. Green; two nieces, Lucia Augustus and Vanessa Greene. He leaves to celebrate his life and cherish precious memories: his two sons, Ernest Green Jr. of Palmdale, CA, Willard V. Green (Toni) of Harrisburg, PA; two granddaughters, Markia Erickson (Shelby) of Long Beach, CA, Tanisha Autman (Anka) of Fairfax, VA; two grandsons, Jewellius Green and Juziahh Green, both of Palmdale, CA; two great-granddaughters, Zuri and Marlo Erickson of Long Beach, CA; and Baby Autman, due in January 2021, of Fairfax, VA; his brother, Arthur Johnny Green (Judy) of Harrisburg, PA; his sister, Cora Lee Palmer of Carlisle, PA, and a host of other family members and friends. FAMILY AND FRIENDS ARE ENCOURAGED TO CLICK ON THE SHARE A MEMORY TAB TO POST VIDEOS, SHARE MEMORIES, CONDOLENCES, REFLECTIONS OR SIMPLY YOUR NAME ALLOWING THE FAMILY TO KNOW YOU ARE THINKING OF THEM. ON-LINE STREAMING OF SERVICE. CLICK ON THE PHOTOS & VIDEOS TAB OR MEDIA TAB (MOBILE) AND TRIBUTE WEBCAST TO VIEW.

Ernest Jesse Green was born on Monday, September 8, 1930, in Berkely County, South Carolina, to the late Sarah and William Green. He received his formal education in the Berkely County Public Schools. At the age of seventeen, when his father... View Obituary & Service Information

The family of Ernest Jesse Green Sr. created this Life Tributes page to make it easy to share your memories.