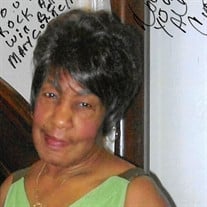 Ella Ree Frazier, daughter of the late Elliott Frazier, Sr. and the late Irene Benson Frazier, was born January 4, 1935, in Lancaster, South Carolina. She received her education through the Lancaster, South Carolina School District. Ella retired from the Harrisburg Hospital, Harrisburg PA, working as a housekeeper in the maternity ward. Sometimes she was blessed to be present at the birth of some of her grandchildren. Spending birthdays and holidays with her children, grandchildren, great-grandchildren and great-great grandchildren were one of her greatest joys. The entire first floor of her home would be standing room only. Ella reared her granddaughters, Angela Rembert and Angela Davis, along with the rest of her grandchildren. When you called to ask how she was doing, Ella would talk about what happened during her day, her week, what Pastor Smalls preached about and then her dog Collie. She had the gift to talk and make you laugh. Ella was a former member of Turner Memorial Missionary Baptist Church, Steelton, PA, where she sang the lead for, “You’re Going To Need Somebody On Your Side.” On May 26, 1991, she joined Macedonia Missionary Baptist Church, Harrisburg, where she enjoyed singing on the Mass Choir and listening to the Word of God. Ella’s eternal life began on August 10, 2021, at UPMC Harrisburg. In addition to her parents, Ella was preceded in death by her ex-husband, James Cornelius; her grandson, Akeem Cornelius; her sisters, Ida Mae Washington and Sadie Sellers; her brothers, Robert Frazier, Willie Frazier and Freddie Lee Montgomery; her sisters-in-law, Willean Frazier, Loretta Frazier, Gloria Frazier and Susanna Montgomery; her brothers-in-law, Woodrow Washington, John Lee Curry, Lloyd Mcllwain, Sr. and Charlie White; and her daughter-in-law, Edith Cornelius. Those left to cherish fond memories are her children, her son, James C. Cornelius, his wife Regene; her daughter, Mary Ann Cornelius, her companion, Mark Raye; her son, Willie E. Cornelius, his wife Ronda; her son, Franklin Cornelius, his wife Wylean; her son, Christopher Cornelius; her daughter, Cynthia D. Fuller, her husband Charles; her son, Floyd Cornelius; her son, Timothy Cornelius, Sr., his fiancée Tina Piper-Jefferson; her 27 grandchildren, her 44 great-grandchildren, her 6 great-great-grandchildren; her sisters, Annie Lou Curry, Bernice Mcllwain, Catherine White, all of Lancaster, South Carolina; her brothers, Bobby Frazier, his wife Fannie of Lancaster, South Carolina, Hazel Frazier and Elliott Frazier, Jr.; her sister-in-law, Virginia Frazier, all of Washington, District of Columbia; her brother-in-law, Joe Sellers of Melbourne, Florida; along with a host of nieces, nephews, cousins, her church family and her friends. FAMILY AND FRIENDS ARE ENCOURAGED TO CLICK ON THE SHARE A MEMORY TAB TO POST VIDEOS, SHARE MEMORIES, CONDOLENCES, REFLECTIONS OR SIMPLY YOUR NAME. CLICK ON THE PHOTOS & VIDEOS ON-LINE STREAMING OF SERVICE TAB OR MEDIA TAB (MOBILE) AND TRIBUTE WEBCAST TO VIEW SERVICE.

The family of Ella Ree Frazier created this Life Tributes page to make it easy to share your memories.

Send flowers to the Frazier family.