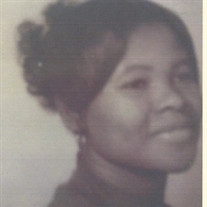 ~~~~~~~~~~~~~~~~~~~~~~~~~~~~~~~ “For God so loved the world, that he gave his only begotten son, that whosoever believeth in him should not perish, but have everlasting life.” John 3:16 ~~~~~~~~~~~~~~~~~~~~~~~~~~ Elizabeth Looney, aka “Lizzy,” was born in Danburg, Wilkes County, GA, daughter of Mittie Walker (Blackwell) and Marvin McNeil Clark. Upon moving to Greenville, SC, Elizabeth’s mother later married Elzy Walker who treated Elizabeth as his own. When she was very young, the new family moved to Harrisburg, PA, in search of better economic opportunities. Elizabeth graduated from the former John Harris High School, Class of 1970. Thereafter, she accepted employment with the Commonwealth of Pennsylvania. In 1974, Elizabeth married Samuel Looney, and the family moved to Alabama. There, she was united in Christian fellowship with the Pine Hills Seventh Day Adventist Church where she sang in the choir and served on the usher board. She was employed by Coosa Valley Baptist Medical Center and the Western Chapter United Methodist Church. She lived in Alabama for almost twenty-eight years before returning to Harrisburg, PA, due to the end of her marriage and health issues. Upon returning to Harrisburg, she became a faithful member of St. Paul Missionary Baptist Church. Elizabeth had a passion for life always happy and a joy to be around. She loved her church, music and singing. Elizabeth transitioned into eternal life on Tuesday, June 5, 2018, at the age of sixty-six. She was preceded in death by her parents; son, Christopher Looney; daughter, Shawnetta Looney; and sisters, Jeanie Clark and Joanne Beard (Clark). She leaves to celebrate her life and honor her legacy her partner and friend, Larry Lawson; father, Marvin McNeil Clark; son, Aaron Looney; daughter, Sherree Looney; sisters, Margie Lawson (Robert), Melody Clark, Caroline Clark; granddaughter, Brianna Looney for whom she was guardian; son-in-law, Antron Parks; and a host of other grandchildren, nieces, nephews, other relatives and friends. Giving God all glory, honor and praise, Lovingly Submitted by the family

The family of Ms. Elizabeth Looney created this Life Tributes page to make it easy to share your memories.

Send flowers to the Looney family.