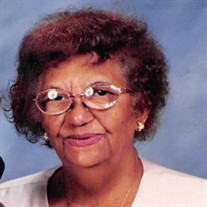 Edna Ree Williams, 98, of Harrisburg, Pennsylvania, formerly of Birmingham, Alabama, was called to be with her Lord and Savior on Saturday, February 6, 2021. Edna was born on September 22, 1922, in Suggsville, Alabama, to the late Oliga and Willie Tate. She was preceded in death by her only brother, Clay Tate. She married Jacob Williams, her school sweetheart, who preceded her in death. She affectionately called him Jake and their union produced four children. Edna was a faithful member of Evergreen Missionary Baptist Church, in Birmingham, where she served on the Usher Board and was a member of the choir until she moved to Harrisburg, PA. Edna was employed with the City of Birmingham until her retirement. She was known for her kind and loving spirit in which she cared for others, including her mother until her mother’s death at age 97. She loved gardening and baking, her specialties were sour cream pound and chocolate cakes. Edna Ree Williams is survived by her four children, Evelyn (George) Roberson, of Birmingham, AL, Brenda Banks, Harrisburg, PA, Jacob Williams, of Palmyra, PA, Jean (William) Hunter, of Harrisburg, PA; six grandchildren, Jennifer (Cortelius) Braxton, Birmingham, AL, Darnell (Heather) Williams, Kimberly (Steven) Early, Bridget (Tim) Derr, Crystal Banks and Shayla Hunter, all of Harrisburg, PA; and five great-grandchildren, Darnell Williams Jr., Brianna Williams, Evan Jacob Braxton, Mason Early, and Mya Williams; a host of devoted nieces including, Alzada Sams, Boston, MA, Annie Ruth Sanders, Richmond, IN, Gwen Taylor, Marsha Campbell, Gracie Junious, all of Birmingham, AL; a host of devoted nephews including, Joe Davis, Harrisburg, PA, Leslie Campbell, Germany, Calvin Tate, Allen, AL, Leron Tate, Atlanta, GA. Lovingly Forever Remembered, The Family FAMILY AND FRIENDS ARE ENCOURAGED TO CLICK ON THE SHARE A MEMORY TAB TO POST VIDEOS, SHARE MEMORIES, CONDOLENCES, REFLECTIONS OR SIMPLY YOUR NAME. CLICK ON THE PHOTOS & VIDEOS ON-LINE STREAMING OF SERVICE TAB OR MEDIA TAB (MOBILE) AND TRIBUTE WEBCAST TO VIEW SERVICE.

Edna Ree Williams, 98, of Harrisburg, Pennsylvania, formerly of Birmingham, Alabama, was called to be with her Lord and Savior on Saturday, February 6, 2021. Edna was born on September 22, 1922, in Suggsville, Alabama, to the late Oliga and... View Obituary & Service Information

The family of Edna Ree Williams created this Life Tributes page to make it easy to share your memories.