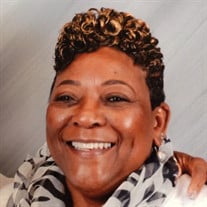 Diane G. Griffy “To everything there is a season, and a time to every purpose under the Heaven…” Ecclesiastes 3:1 “A Time to be Born” On Wednesday, October 18, 1950, in Richburg, South Carolina, Diane Gaston entered the world. She was born to her loving parents, the late Willie Gaston and the late Maggie Stroud-Gaston. “A Time to Learn and Work” Diane received her early education at Boas Elementary School and Camp Curtin Junior High School in Harrisburg, Pennsylvania. In 1968, she received her high school diploma from the former William Penn High School, “Home of the Tigers.” She began her career in 1968 at Bell of PA Telephone Company as a telephone operator and held various positions until she retired with over thirty years of service. After her retirement, she worked part-time at Coy Accounting Firm and various department stores. “A Time to Worship and Serve” Diane united with the New Hope Living Baptist Church of Steelton, PA, under the leadership of Reverend Scott A. White Sr. In 1978, along with her daughter Lisa, through water baptismal she accepted Jesus as Lord and Savior and remained a faithful member of the church until her passing. She was an active and dedicated member serving on the Women’s Fellowship and Food Bank Ministries and as Church Treasurer. In addition, she was always a cheerful and willing participant to bake her famous pound cakes and sweet potato pies whenever the need arose. Like her Mother, Diane loved to cook and bake. From her homemade Kool-Aid, to her banana pudding made from scratch, she would feed you and also provide you with a place to lay your head. “A Time for Family and Friends” Diane, the oldest of four children, learned at an early age to be the surrogate mother to her siblings as well as her younger cousins. Diane married her childhood sweetheart and the love-of-her-life, Charles William "Mike" Griffy who preceded her in death. Their union was blessed with one child Lisa. Lisa was her everything from the time she was born until the day she went on to be with the Lord. Additionally, she graciously assumed the responsibility of caring for her two grandchildren, Tahjir and Michael. Not only did she have her biological family, she had a family of close friends. She was so well-known by so many people that you could not go anywhere without someone knowing her. Childhood, neighborhood, school, work, church, young, old, Black, White, Puerto Rican, Vietnamese, Mexican, it didn’t matter who you were, she would always find the good in you, and they would always find the God in her. “A Time to Die” On Tuesday, March 27, 2018, in her sixty-seventh year, Diane returned forevermore to her Heavenly Father and to be reunited with her husband, mother, father and many friends gone before her. “A Time to Mourn” Diane leaves to celebrate her life her devoted daughter, Lisa M. Griffy; her two grandsons, Tahjir Dunlap and Michael Griffy; one sister, Lovella Burhannon; two brothers, Jerome L. Gaston Sr. (Wanda Jefferies, fiancée) and Gary G. Gaston Sr. (Jennifer Buzby, partner-in-love-and-life), all of Harrisburg, Pennsylvania; adopted brother, Dr. Alvin J. Cook, and niece, Chinwe` S. Maponya-Cook of Atlanta, Georgia; aunt, Willa Mae “Tot” Stroud; special cousins, Debra James, Wanda James-Rucker (Billie), Marie James-Bowers (Donald), all of Harrisburg; nieces, Denisha White (Shawn) of Philadelphia, Pennsylvania, Shawnte Arrington of Los Angeles, California, Shannon Gaston and Tara Gaston; nephews, Jerome Gaston Jr. of Harrisburg, Taylor Gaston of Phoenix, Arizona, and Gary Gaston Jr. of Harrisburg. Diane’s life will also be lovingly remembered by her God-son, Joseph Proctor; special sister-friends, Marcella Proctor and Gail Fluellen-Phillips of Chesapeake, Virginia; special friends, Bell of PA Posse (Roz Proctor, Bernie Gillis, Jacquetta McCoy and Laverne Hudnell; as well as other family members and friends, too numerous to mention by name. Diane will be truly missed! Lovingly Submitted by Diane’s Family

The family of Ms. Diane G. Griffy created this Life Tributes page to make it easy to share your memories.

Diane G. Griffy
“To everything there is a season, and a time...

Send flowers to the Griffy family.