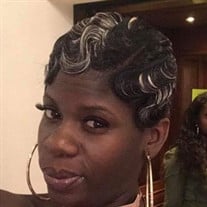 Denise Shardae Walker, affectionately known as “Nicey,” was born Friday, September 22, 1989, in Harrisburg, PA, daughter of Aretta McMillian and the late John Benjamin Walker. Nicey attended John Harris and Central Dauphin East High Schools; faithfully attended Community Baptist Church; and was a member of the Democratic Club. A popular and hardworking bartender at Queenie Café, Nicey was extremely loyal to her friends and her family. She was kind, caring, strong-willed and spoke her mind, take it or leave it. Always greeting everyone with a hug and a smile, one could feel her positive energy. Nicey was quiet when necessary; however, she was always prepared to step up and be a force to be reckoned with rather concerning the climate of violence in the City of Harrisburg, where she grew up or any other issue. She was one-of-a-kind with a big personality and a big attitude which were evidenced by her stylish and fashionable attire which she wore boldly and confidently and the fierce hairstyles she created for herself and her friends. Always with a book-in-hand, Nicey loved to read and would devour large novels within three days. Among her other passions were sports, shooting pool, playing bingo and cooking. Foremost, she loved spending time with friends and family, especially her nieces and nephews who were her pride and joy. Even though Nicey had no children of her own, she was fabulous with children. She helped to raise a young cousin, now twelve, whose father died of cancer. At twenty-nine years of age, on Wednesday, September 4, 2019, eighteen days prior to her thirtieth birthday, Nicey passed from time to eternity joining her father, John Benjamin Walker, and her grandmother, Minnie L. McMillian Murphy. Denise Shardae “Nicey” Walker leaves to share the sorrow of her transition and forever cherish loving and irreplaceable memories: her mother, Aretta McMillian; sister, Tyretta McMillian, brother, Anthony Walker, sister, Annjetta Walker, and brother, Melvin McMillian Walker, all of Harrisburg, PA; as well as a host of nieces, nephews, cousins, other family members, many friends and godchildren.

The family of Ms. Denise Shardae "Nicey" Walker created this Life Tributes page to make it easy to share your memories.

Send flowers to the Walker family.