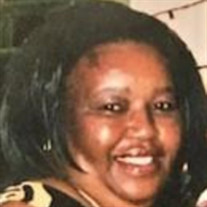 Deborah, affectionately known as Debbie, was born in the town of Easton, Maryland, on Thursday, April 17, 1952, daughter of Howard Edward Young Sr. and Alma Virginia Wilson. After attending Easton High School, Debbie moved to Plainfield, New Jersey, where she had her children, Johnnette and Raeneka, and went on to graduate from Sawyer Business School receiving Certification in Business Administration. Soon after graduation, she landed a great job at Cenlar. During Deb’s journey she had a change of heart in her career choice and decided to leap into the healthcare field where she could do what she loved most, care for others. Deb took a life fulfilling position at Villa Maria Home for the Aged where she remained for many years until she retired in 2001 and moved to Harrisburg, PA. Deborah Young was a powerful woman of God and had an unfeigned faith in Jesus Christ. Her love for God and Christ showed through in her actions of helping people wherever she could. She had a joyous, infectious laugh, loved to give hugs and had a sense of humor that was out-of-this-world! Deb loved music, movies, dancing and could draw very well often doodling cartoon characters as she sipped on a glass of Pepsi with plenty of ice! Debbie was a true lover of life and had a genuine appreciation for people. Her kind spirit was felt by all who were blessed to meet her. Foremost and above all, she tremendously loved her family. Debbie was a loving mother and grandmother; her unconditional love for her daughters and grandchildren could only be matched by God alone. Deborah Virginia Young was called Home to Glory on Tuesday, May 12, 2020, in Harrisburg, PA. She was preceded in death by her mother and father, Alma Virginia Wilson and Howard Edward Young Sr.; granddaughter, Serene B. Young; and siblings, Joyce Nixon, Wayne Nixon and Kelin Young. Deborah leaves to cherish irreplaceable memories and honor her legacy of love, faith and dedication: two daughters, Johnnette O. Young-Lewis (Terrelle Lewis), Raeneka Young, both of Pittsburgh, PA; grandson, Vaughn Langford-Young of Greater Pittsburgh, PA, granddaughter, Bre`ah Young-Lewis, grandson, Justice Young-Lewis, both of Pittsburgh, PA; spiritual mother, Mary Wilson of Plainfield, NJ; spiritual nieces, Jacquie Wilson of Plainfield, NJ, Sheila Wilson of Haledon, NJ; spiritual nephew, Ben McNeill of Plainfield, NJ; her siblings, Howard Edward Young Jr. of Quebec, Canada, Rev. Ida Young-Ositelu of Salisbury, MD, Peggy Young-Brooks of Trappe, MD, Eric Jerome Wilson of Baltimore, MD, Dwight Wilson of Laurel, DE, Johanna Young of Easton, MD, Tyler Young of Easton, MD, Terence Young of Hagerstown, MD, Antoine Young of Laurel, DE, Frederika Perry of North Carolina, Ikean Young of Easton, MD; special friends, Gail Hawthorne of North Plainfield, NJ, Laverne Armstrong of VA, Patricia Carter of Plainfield, NJ; host of nieces, nephews, cousins and dear friends. Debbie will truly be missed by many! FAMILY AND FRIENDS ARE ENCOURAGED TO CLICK ON THE SHARE A MEMORY TAB TO POST VIDEOS, SHARE MEMORIES, CONDOLENCES, REFLECTIONS OR SIMPLY YOUR NAME ALLOWING THE YOUNG FAMILY KNOW YOU ARE THINKING OF THEM DURING THIS TIME OF BEREAVEMENT. ON-LINE STREAMING OF SERVICE. CLICK ON THE PHOTOS & VIDEOS OR MEDIA (MOBILE) TAB TO VIEW.

The family of Deborah Virginia Young created this Life Tributes page to make it easy to share your memories.

Deborah, affectionately known as Debbie, was born in the town...

Send flowers to the Young family.