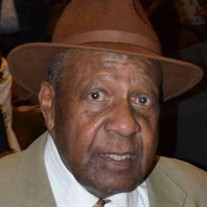 Cleveland Douglas Wade, son of the late Turner Wade and Fannie Cooke Wade, was born in Franklin County, Virginia, on Friday, September 21, 1934. He spent his early years at the Franklin County Training School of Virginia and attended William Penn High School, Harrisburg, PA. He served honorably in the United States Army during the Korean War. He was a golf pioneer for the African American Community where he served as one of the first African American golf professional caddies on the Senior Professional Golf Association Tour. He retired and brought his knowledge back to the City of Harrisburg where he started the first and only golf youth program. He served as a mentor and educator to the youth, instilling wisdom and life lessons. He retired from the City of Harrisburg Parks and Recreation Department. He was an avid musician and singer/songwriter. In his youth, he traveled and performed in different venues around the country where he was given the nickname, “Piano Man.” In Harrisburg, PA, at eighty-six years of age, Cleveland Douglas Wade passed away on Thursday, April 1, 2021, surrounded by his loving family. Along with his parents, he was preceded in death by his wife, Lois Stringer; and a son, Douglas E. Williams. He leaves to remember his life and cherish irreplaceable memories his children, Debbie Porter, Douglas P. Smith, Bryan K. Wade and Justin Wade; an aunt, Maxine Cooke; grandchildren, great-grandchildren, many cousins, other family members and close friends. FAMILY AND FRIENDS ARE ENCOURAGED TO CLICK ON THE SHARE A MEMORY TAB TO POST VIDEOS, SHARE MEMORIES, CONDOLENCES, REFLECTIONS OR SIMPLY YOUR NAME. CLICK ON THE PHOTOS & VIDEOS ON-LINE STREAMING OF SERVICE TAB OR MEDIA TAB (MOBILE) AND TRIBUTE WEBCAST TO VIEW SERVICE. PRIVATE SERVICE; PUBLIC VIEWING/VISITATION

The family of Cleveland Douglas Wade created this Life Tributes page to make it easy to share your memories.

Send flowers to the Wade family.