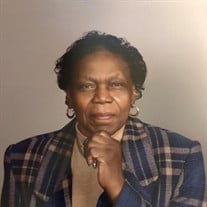 Claudine Nichols, daughter of the late Felton and Lodia Jane Griffin Nichols, was born in Decatur, Mississippi, on November 5, 1938. She was one of nine children. "God saw that she was getting tired, so He put His arms around her and whispered, come with me,”… she peacefully transitioned on Friday, December 4, 2020. As a student, Claudine always earned the highest grades and was loved by all her teachers. Her grades put a lot of pressure on her brothers who didn't share her love for school. She also played on the basketball team at school and gained notoriety for her skills on the court. Claudine graduated with high honors from C. H. Boler High School in June of 1958. A year after completing high school, Claudine packed her bags and headed north to Washington, D.C., where she moved in with her late brother Woodrow, his wife Virgie, and their daughter Delilah. She acquired a job at Manhattan Laundry and Dry Cleaners and spent many afternoons walking Delilah and some of the neighborhood kids from school. About nine months later, feeling homesick, Claudine returned to Mississippi. She didn't really enjoy the fast pace of Washington, D.C., but still yearned to explore beyond Mississippi. Having accepted Christ as a young child, when Claudine wasn't working with her family, she was at church, Midway Missionary Baptist Church, which became her second home. In August of 1959 at Midway's revival, her cousin, the late Homer Lee Smith, and his wife, the late Essie Thames Smith, offered her an opportunity to head north once again. She accepted their offer and headed to Harrisburg, PA, where she lived until God called her home. Upon relocating to Harrisburg, Claudine joined the Goodwin Memorial Baptist Church where she served as a member of the Gospel Choir, assisted with the Buds Choir, Baptist Training Union, Vacation Bible School, Children’s Church and served as a Trustee. Her parents owned a farm, and Claudine developed a strong work ethic from contributing to the work on the family farm. Claudine’s employment history included the Kline Family Cleaners, Polyclinic Hospital Dietary Department, and she spent over thirty years with the Pennsylvania State Education Association. God takes ordinary people to do extraordinary things, and she was one of those people. She just had a love and passion for kids. Wherever she was she would seek them out or they would seek her out. She enjoyed completing word find puzzles, attending church conferences and participating in the Harrisburg Area Chapter of the Gospel Music Workshop. Claudine leaves to cherish precious memories two sisters, Auree Ola Reed of Oakland, California, Jewell Goodrum of Harrisburg, PA; several sisters-in-law; three Goddaughters, Deann Harris Washington of Rosedale, MD, Holly Spencer Harmon of Philadelphia, PA, and Li’Ayjah Shannon of Mechanicsburg, PA. Claudine’s memory and legacy will also be honored and cherished by her three grandsons, Trey, Travis Washington and Troy Watkins; a host of nieces and nephews who loved their “Auntie;” other family members and friends as well as her superb caregivers, Sylvia Harris, Regina Harris, Ethelene Harmon and Theresa Watson. Claudine was preceded in death by her parents, Felton and Lodia; brothers, Jimmy Lee, Raymond, Jethro, Woodrow, Felton Jr., Clarence and Robert.

Claudine Nichols, daughter of the late Felton and Lodia Jane Griffin Nichols, was born in Decatur, Mississippi, on November 5, 1938. She was one of nine children. "God saw that she was getting tired, so He put His arms around her and whispered,... View Obituary & Service Information

The family of Claudine Nichols created this Life Tributes page to make it easy to share your memories.

Claudine Nichols, daughter of the late Felton and Lodia Jane...

Send flowers to the Nichols family.