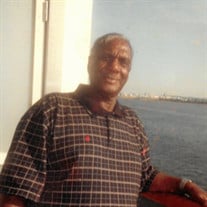 Charles E. Sheppard, son of Charles M. Sheppard and Thelma (Perkins) Sheppard, was born Sunday, June 9, 1940, in Greenville, South Carolina. Charles received his formal education at Haze Elementary and Hine Junior High School, Washington, DC. At seven years of age, Charles started his shoe shining career which he continued throughout the years. He was formerly employed by the United States Capitol. With a sense of humor second to none, Charles loved telling jokes as well as gardening. He was a member of Healing Center where he served as Deacon and Treasurer. In his eightieth year, Charles E. Sheppard transitioned from time to eternity on Wednesday, December 2, 2020. He leaves to honor his legacy: his devoted wife, Diane Sheppard of Harrisburg, PA; sister, Iola Washington, son, Joseph Langley, daughters, Ebony Y. Sheppard, all of Washington, D.C., and Talisha Murray of Harrisburg; sisters-in-law, Janice and Alveta Murray of Philadelphia, PA; granddaughter, Micaiah Murray, grandsons, Nasir Jordan, Anthony Grier, all of Harrisburg, and Keivonte Sheppard of Washington, DC; seven grandchildren, one godchild, Amber Anderson; and a host of nieces, nephews, other family members and friends. FAMILY AND FRIENDS ARE ENCOURAGED TO CLICK ON THE SHARE A MEMORY TAB TO POST VIDEOS, SHARE MEMORIES, CONDOLENCES, REFLECTIONS OR SIMPLY YOUR NAME ALLOWING THE FAMILY TO KNOW YOU ARE THINKING OF THEM. ON-LINE STREAMING OF SERVICE. CLICK ON THE PHOTOS & VIDEOS TAB OR MEDIA TAB (MOBILE) AND TRIBUTE WEBCAST TO VIEW.

The family of Charles E. Sheppard created this Life Tributes page to make it easy to share your memories.

Send flowers to the Sheppard family.