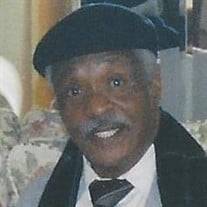 Charles Wesley Robinson Sr., affectionately known as “Charlie,” was born Wednesday, January, 7, 1931, in Harrisburg, PA. On Friday, August 16, 2019, God called Charlie into eternal rest. Charlie was the youngest of seven children of the late Delaney Robinson Sr. and Veda Robinson. He was preceded in death by his brothers and sisters, Delaney Jr., Lewis, MacIver/Amir, Eleanora Campbell, Cecilia Hargis and Charlotte Arrington. At an early age, Charlie attended his family’s church, Capital Presbyterian, 14th and Cumberland Streets, Harrisburg, PA. He also attended Harrisburg High School where his great interests were running track and playing drums. Upon his high school graduation in 1949, Charlie attended percussion school in Chicago, IL, between 1949 -1951 and became a trained to read music Percussionist. He was able to perform in symphony orchestras, ensembles and bands. Playing drums would be the love of his entire life. In 1951, he was drafted into the United States Army and served until 1953. Upon his discharge from the army, he went to college on a G.I. Bill and attended Virginia State College in Petersburg, VA. While attending Virginia State, Charlie met a Virginia State student named Sue Cooley Kenney while playing drums on weekends at a club in downtown Petersburg. On December 18, 1954, they were married in Jackson Ward, Downtown Richmond Virginia’s Black Historical District. In 1955, when college friends invited them to caravan together across the country to San Diego, CA, they both jumped at the chance to start their new married life in California. They lived in San Diego from 1955 to 1963. While living in San Diego, Charlie landed a job at IBM. In addition to work, he helped put together a band known as the “Three Aces and a Spade,” where he was the Drummer/Percussionist. The band was so good that when country music star Johnny Cash came to town and needed a band for a few nights, the band was selected to play as Cash’s emergency back-up band. Between 1957 - 1960, Charlie and Sue had three children born in Mercy Hospital, San Diego County: Robert/Amir, Cecilia Kathleen and Charles Jr. In 1963, Charlie and family returned to the East Coast. Charlie spent decades going back and forth between Richmond, VA, and Harrisburg, PA, being a father, husband, son, brother, brother-in-law, friend, activist, nurturer, worker, pop, grand-pop and Uncle Charlie. In Harrisburg, Charlie lovingly nurtured and supported his best friend Barbara Walker, her children and grandchildren. Additionally, a few endeavors Charlie accomplished throughout the decades were Group Counselor at Hanover School for Boys in Hanover, VA; Youth Leader for the Y Indian Guide of the YMCA, Richmond, VA; employment at U. S. Steel, Steelton, PA; entrepreneur Painter/Carpenter in Harrisburg and in Richmond; Drummer/Percussionist in various churches in Harrisburg. Charlie was preceded in death by his wife, Sue Cooley Kenney Robinson in 1993, and his son, Charles Wesley Robinson Jr. in 2013. He leaves to cherish his memory a son, Amir Rahim (Khadija); a daughter, Kathleen Robinson Collier (Trotter); step-granddaughter, Keisha Collier; best friend, Barbara Walker and her family; as well as a host of nieces, nephews, cousins and community friends. Lovingly Submitted by the Family of Mr. Charles Wesley Robinson Sr. Interment will be August 30, 2019 at Forest Lawn Cemetery, 4000 Pilots Lane, Richmond, VA 23222

The family of Mr. Charles Wesley Robinson Sr. created this Life Tributes page to make it easy to share your memories.