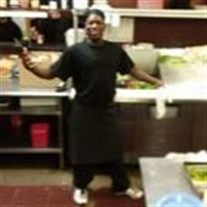 Charles Robert Jamison, 52, of Harrisburg, PA, passed away suddenly on Friday, January 10, 2020, at home surrounded by family. Charles was born December 18, 1967, in Harrisburg, PA, to Charles Finley and Patricia Levi-Jamison. He graduated from Harrisburg High School, in 1985 and was employed at the Coliseum Mega Plex. Charles loved to cook and was a Chef for over 30 years. During that time, he was a mentor to many and was very popular and in demand. He was often requested to cater weddings and other events. If Charles cooked for you that meant he viewed you as family. Charles was an avid Dallas Cowboys Fan. He would celebrate and defend his team like no other. If you wanted to hear his passion for his team, talk trash about the Cowboys and watch him go off. It would be an ongoing debate every time he saw you. Charles had a smile that would brighten up any room he walked into. To know Charles was to love Charles. He was a great friend to many. Above all, Charles was a devoted family man. He loved his family unconditionally. There wasn’t anything he wouldn’t do for anyone he loved. Charles was preceded in death by his father, Charles Finley; his mother, Patricia Jamison; and his nephew, Shawn Jamison. Charles is survived by his brother, Vernon Jamison; his sisters, Kim Eaton, Toni Brooks and Glenda Jamison; his beloved daughters, Aigner, Mercedes and Portia Jamison; his granddaughters, Etienne Jackson, Ahzareah Poole, Zyairah Collins, Eionna Collier and J`Ahanna Walker; his loving fiancée, Karen Skotnicki; his best friend, Holly Bias; as well as his nieces, nephews, aunts, uncles, other family and friends. Always in our Hearts! Lovingly Submitted, The Family

The family of Mr. Charles Robert Jamison created this Life Tributes page to make it easy to share your memories.

Send flowers to the Jamison family.