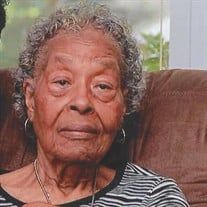 Cathleen J. Cox, one of nine children of the late Jerry Reid Penn and the late Maxie Sawyers Penn, was born Wednesday, May 8, 1929, on the family farm in Mount Airy, NC. She graduated from J. J. Jones High School where she was active in school plays and the Glee Club. Growing up, she attended Samuels Grove Church. At the age of twenty-one, she was baptized in a river during revival by her father-in-law, Rev. Roy Cox. On June 10, 1950, Cathleen married Howard Cox Sr. who preceded her in death. Shortly thereafter, Cathleen and Howard relocated to Steelton, PA. Cathleen and Howard were blessed with four beautiful children, Howard Jr., Priscilla, Kenneth and Darrell. She united in Christian fellowship with The First Baptist Church of Steelton where she remained for many years until the time of her transition. Cathleen served with The First Baptist Flower Ministry, and she loved her church and the fellowship of her church family. In her youth, Cathleen’s very first job was babysitting after school. Later in life, her employment path included working at a dental factory, D&H Distributors, Harrisburg School District and, foremost, working alongside her husband Howard as owner of a very successful commercial janitorial business which provided employment for numerous family members and friends. Very independent, Cathleen was also a lady of faith and love. Her family was the primary love-of-her-life. She especially enjoyed family reunions and family get-togethers. All holidays were special to her as long as the family was together. She prayed for her family on a daily basis and instilled in her children and grandchildren the importance of family relationships as well as the importance of knowing your family roots. Her most proud and treasured moments in life were uniting in holy matrimony with her husband Howard, raising her children and watching her children and grandchildren grow into maturity becoming who they are. Her younger sister Virginia related how even though the family had very little growing up and could not afford many gifts, her big sister Cathleen always looked out for her making sure she received something for the holidays and other special occasions. An accomplished cook and baker, Cathleen was sought after for her delicious dishes and baked goods. Her sweet potato pie was second-to-none. Family and friends always stopped by Cathleen’s home expecting and hoping for a good meal and a special dessert. She would ask her family, “What would you like for your birthday?” –and, of course, you received one of her specialties. On many occasions, she vowed to stop the “cooking and baking,” but continued on with her labor-of-love. Cathleen found contentment and fulfillment in reading from childhood to adulthood; her most favorite book as a child was “Little Women.” She also loved watching soap operas and “The Price is Right” game show. Even though Cathleen was always fashionably well-dressed, she had a special passion for her shoes and handbags and always shopped for good deals. In Harrisburg, PA, on Monday, December 16, 2019, at the blessed age of ninety, Cathleen J. Cox transitioned from time to eternity joining her parents, husband and six siblings, Leonard Penn, Odessa Chivis, Martha Roberts, Vesta Penn, Eva Bowman and Jerry Penn. She leaves to cherish irreplaceable memories and honor her legacy of love, faith, dedication and commitment: four children, Howard Cox Jr. (Diane) of Steelton, PA, Priscilla Hunter of Harrisburg, PA, Kenneth Cox (Clarice) of Harrisburg, PA, and Darrell Cox (Marcia) of Riverdale, MD; seven grandchildren, Johnathon Cox of Raleigh, NC, Michelle Cox of Durham, NC, Brett Woodruff of Harrisburg, PA, Brandi Hunter-Davenport of Harrisburg, PA, Ricky House of Arlington, VA, Chelsea Cox of Philadelphia, PA, and Crystal Foster of Steelton, PA; six great-grandchildren; one sister, Virginia Jarvis of Mount Airy, NC; one brother, Harvey Penn of Elmira, NY; nieces, nephews, cousins, in-laws and friends. Cathleen’s Spiritual Testimony: “My strength comes from Trusting in God; With God, all things are possible.” Respectfully and Lovingly Submitted, The Family of Cathleen J. Cox Memorial contributions may be made to Carolyn House, 1701 Linglestown Road, Harrisburg, PA 17101

Cathleen J. Cox, one of nine children of the late Jerry Reid Penn and the late Maxie Sawyers Penn, was born Wednesday, May 8, 1929, on the family farm in Mount Airy, NC. She graduated from J. J. Jones High School where she was active in school... View Obituary & Service Information

The family of Mrs. Cathleen J. Cox created this Life Tributes page to make it easy to share your memories.

Cathleen J. Cox, one of nine children of the late Jerry Reid...

Send flowers to the Cox family.