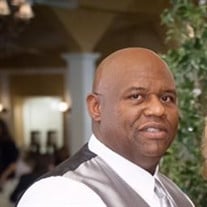 Carl Frederick Watson, son of Doris Hughes Watson and the late Carroll Watson, was born February 26, 1960, in Summerville, South Carolina. A graduate of Harrisburg High School, Harrisburg, PA, he earned the distinction of All-American Athlete. He served in the U.S. Army as an Army Tank Operator and was employed by Old Dominion Freight Line, Carlisle, PA. Carl was united in Christian fellowship with Capital Area Christian Church. Carl was a hard worker who loved spending time with his family, especially his wife, children and grandsons. He sang “Happy Birthday” to all family members every year on their birthdays and was considered “King of Christmas Charades.” He also enjoyed weightlifting, personal fitness, football, baseball and avidly supporting his favorite teams, the Eagles and the Yankees. At the age of fifty-seven, Carl completed his journey on Wednesday, August 30, 2017. Along with his father, he was also preceded in death by his grandmother, Earmell Hughes. Sharing the void of his departure while reminiscing over many loving and irreplaceable memories are his wife, Cindy Gaumer Watson of Shiremanstown, PA; daughters, Caress Watson of Shiremanstown, PA, Nicole Mukusa and her husband Asani of Dillsburg, PA, and Tiffany Acri of Mechanicsburg, PA; his mother, Doris Hughes Watson of Fayetteville, GA; sister, Charlene Leslie and her husband Anthony of Fayetteville, GA; grandsons, Cameron Burkett of Mechanicsburg, PA, and Chase Mukusa of Dillsburg, PA; niece, Brittany Leslie of Fayetteville, GA; sister-in-law, Lori Croop and her husband Randy of Berwick, PA; as well as other relatives and friends. Lovingly Submitted, The Family

The family of Mr. Carl Frederick Watson created this Life Tributes page to make it easy to share your memories.

Send flowers to the Watson family.