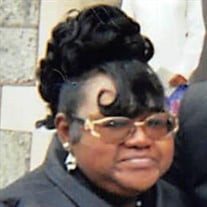 Brenda Patricia Butler, the youngest of eight children of the late Virgil Davenport Sr. and the late Grace Wise Davenport, was born Sunday, September 29, 1946, in Harrisburg, Pennsylvania. Brenda received her education in the Harrisburg School District where she graduated from William Penn High School. Her employment path included PA Department of Labor & Industry, Office of Unemployment for a number of years and the Harrisburg Hotel. Brenda was a faithful member of Mount Calvary Church of God in Christ. In 1984, our beloved Brenda married the late Ross L. Butler sharing thirty-six years together before his transition on April 5, 2007. Brenda really enjoyed life. She loved to watch a good movie, attend church, shop and, foremost, spend time and share laughter with family and friends. She will be dearly missed. While at her Harrisburg home on Wednesday, December 23, 2020, at seventy-four years of age, Brenda transitioned from time to eternity joining her parents, husband, brothers, Freddie, Napoleon and Virgil Davenport Jr.; son, David Jackson Jr.; and sister, Elizabeth House. Brenda leaves to remember and share many special memories her loving daughter, Kim Harrell; her grandchildren, Demarco Davenport and Vaneesha Lowrie and her spouse, Latocka Lowrie; sisters, Geneva Proctor, Ethelene Davenport; brother, Samuel Davenport; and brother-in-law, Joseph Proctor, all of Harrisburg; as well as her best friend for over forty years, Anna Grisby of Harrisburg; and a host of nieces, nephews, other relatives and friends. FAMILY AND FRIENDS ARE ENCOURAGED TO CLICK ON THE SHARE A MEMORY TAB TO POST VIDEOS, SHARE MEMORIES, CONDOLENCES, REFLECTIONS OR SIMPLY YOUR NAME ALLOWING THE FAMILY TO KNOW YOU ARE THINKING OF THEM. CLICK ON THE PHOTOS & VIDEOS ON-LINE STREAMING OF SERVICE TAB OR MEDIA TAB (MOBILE) AND TRIBUTE WEBCAST TO VIEW.

The family of Brenda Patricia Butler created this Life Tributes page to make it easy to share your memories.

Brenda Patricia Butler, the youngest of eight children of the...

Send flowers to the Butler family.