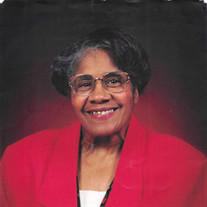 Blondell E. Smith was born April 24, 1934, in Little Washington, Virginia, to the late Mary Jackson and Frank Walker. Blondell shared her life with seven siblings, four brothers and three sisters. She was a hard worker and offered love to all she knew. Her family moved to Pennsylvania in 1959. She met the love-of-her-life, John D. Smith, Sr., and they were married in 1961. This union was shared for 30 years until the Lord took him home. From that union, they raised four children, James, Rickey, Marilyn and Frankie. Blondell enjoyed taking care of others. In her day-to-day responsibilities, she was a Caregiver sharing her heart for serving others and making sure everyone was happy and had what they needed. Even if she thought you needed something, a meal, a loaf of bread, and even toilet paper, she did her best to provide it. She loved the holidays and cooking, her specialties were macaroni and cheese, green beans and her famous pineapple upside down cake. It was always a joy to be with Mom, Mother Blondell, Nana, Grandmom, and she was truly loved by so many. She was everyone’s Nana and Mother. Blondell was a faithful member of The Greater Zion Missionary Baptist Church family, and she kept the joy of the Lord in her heart even through her illness. She often said, “I just want to go to church one more time.” Well Mom, you’re here, and you are resting in the largest church there is, Heaven. Blondell was preceded in death by her husband, John D. Smith, Sr.; her mother, Mary Jackson; her father, Frank Walker; one brother, Hubert Jackson; one sister, Mary Minor Johnson; and her grandson, Cortney Jackson. She leaves precious memories of love to her children, James Jackson (Jonni), Rickey Smith (Lori), Marilyn Smith and Frankie Jackson, Jr. all of Harrisburg, PA; two sisters, Roberta Jackson (Arthur) and Louise Palmer, both of Harrisburg; three brothers, Frank Jackson, Sr., Charles Jackson, both of Harrisburg, and Lawrence Jackson of New Jersey. Children she shared with her husband: Terry Smith, Connie Hughes, Barbara Frye-Chenault and John D. Smith, Jr. In-laws, Leonard (Mary), Lonnie (Betty), James, Joe and Paula. Grandchildren: Marilyn, LaShanna, Dawan, Zina, Jamiah, Angelina, Kimola, Rickey, Ebony, Gabriel, Antwanette, Christopher, Aisha, Niara, Jerrell, Josiah, Giavana, Michele and Kali. Great-Grandchildren: Sidney, Jazlynn, Jayonn, Jordan, Jaceyon, Alajiah, Scarlett, Liam, Ahlesia, Kyzea, Kiersten, NiYuan, Aviannah, Uneek, Zavion, Legend and Ohoneste. Great-Great-Grandchildren – Jahlonee, Cannon, Kaidyn and a new blessing due in April. Two Precious Goddaughters: Breona of Maryland and Natika Winstead of Japan. Daughters-In-Heart: Florence Winstead and Twanna George. A host of nieces, nephews and so many valuable friends and children she adopted in her heart. Blondell will be missed by us all, and we shall savor the memories of this special woman of God. Rest on Mom, no more suffering and worrying, you are at peace. We shall always love you and cherish you. We would like to send our gratitude and thanks to EVERYONE who participated in making our mother’s life manageable during her illness. We want you all to know we could not have done it without you. God Bless you ALL. FAMILY AND FRIENDS ARE ENCOURAGED TO CLICK ON THE SHARE A MEMORY TAB TO POST VIDEOS, SHARE MEMORIES, CONDOLENCES, REFLECTIONS OR SIMPLY YOUR NAME.

Blondell E. Smith was born April 24, 1934, in Little Washington, Virginia, to the late Mary Jackson and Frank Walker. Blondell shared her life with seven siblings, four brothers and three sisters. She was a hard worker and offered love to... View Obituary & Service Information

The family of Blondell E. Smith created this Life Tributes page to make it easy to share your memories.

Send flowers to the Smith family.