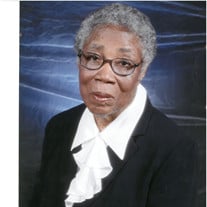 Bessie Franklin was born in Orangeburg County, South Carolina on September 24,1929 to the late Robert Johnson, Sr. and the late Ada (Seawright) Johnson. She was educated in the Orangeburg County School System. At an early age, she joined the Canaan AME Church. Bessie departed this life on November 30, 2017 at the Spring Creek Rehabilitation and Nursing Center where she had been a resident since June 23, 2013. On July 8, 1948, Bessie married George A. Franklin, Sr. in Orangeburg County, South Carolina. Their union produced three children: George Jr., Anthony and Timothy. In late 1954, they moved to Harrisburg, Pennsylvania where they joined the Mitchell Memorial United Methodist Church. Bessie was an active as an usher and in the choir for many years. While raising her children, she worked for more than 20 years as a press operator for Capen Cleaners and other dry clean facilities. Also, Bessie was a licensed cosmetologist and operated her own beauty shop from her home on a part-time basis for many years. Bessie loved to cook and bake for family and friends. She actively participated in her children’s development by attending countless school activities including parent teacher conferences, parades, band concerts, sporting events and award ceremonies. She especially enjoyed her involvement with raising and spoiling her grandchildren and great-grandchildren. Bessie was preceded in death by her husband, George Sr. and her oldest son, George Jr. She is survived by: her son, Anthony Franklin (and his wife, Victoria) of Cypress, Texas; her son, Timothy Franklin of Harrisburg, Pa; her step-daughter, Alice McArthur of Harrisburg, Pa; her daughter-in-law, Caroline Franklin of Harrisburg, Pa; her grandchildren, Keesha Franklin-Waller (and her husband, Raymond) of Harrisburg, Pa; Desiree Boardley (and her husband, Ron) of Harrisburg, Pa; John McArthur of Harrisburg, Pa; Ayesha McArthur-Moore of Laurel, Maryland; Keenan Roberts (and his wife, Pam) of Harrisburg, Pa; Kelley Franklin (and his wife, Amanda) of Highspire, Pa; Karlee Franklin of Jersey City, New Jersey; Douglas Franklin of Cypress, Texas; Victor Franklin (and his wife, Marissa) of Cypress, Texas; Andre Franklin (and his wife, Teri) of Cypress, Texas; twenty-three great-grandchildren; two great-great-grandchildren; her sister, Evelyn Harvey of Harrisburg, Pa; her brother-in-law, Shellie Evans of Harrisburg, Pa; her sister-in-law, Doretha Johnson of Harrisburg, Pa; and a host of nephews, nieces, other relatives, friends and associates. Throughout her life, Bessie served the Lord and shared His lessons with family and friends of the family through her kindness, wisdom and sweet disposition. The family would like to extend special thanks to the staff of Spring Creek Rehabilitation and Nursing Center, the staff and volunteers at Homeland Hospice, the staff of the B’nai B’rith Apartments and the staff of the Wells Fargo Bank on Third Street in Harrisburg for the extra care, genuine kindness and professional support provided to Bessie over the past several years.

Bessie Franklin was born in Orangeburg County, South Carolina on September 24,1929 to the late Robert Johnson, Sr. and the late Ada (Seawright) Johnson. She was educated in the Orangeburg County School System. At an early age, she joined the... View Obituary & Service Information

The family of Mrs. Bessie Franklin created this Life Tributes page to make it easy to share your memories.

Send flowers to the Franklin family.