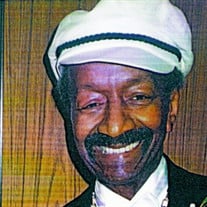 Arthur Alexander Banks, son of the late William M. Banks and the late Mary Fannie (Taylor) Banks, was born Tuesday, November 16, 1926, in Harrisburg, PA. Known as “Otto” by family and friends, he graduated from the former William Penn High School and studied business at Penn State University. Otto served honorably in the United States Navy during World War II and retired from the Commonwealth of Pennsylvania in a supervisory position. He was an entrepreneur who owned three establishments called Otto’s Atmosphere in Harrisburg from 1970-1984. Otto had a special interest in politics. He loved driving Cadillacs, traveling, Philadelphia 76er basketball, dancing, listening to music, especially Frank Sinatra, and spending time with his family and friends. On Friday, December 11, 2020, at the blessed age of ninety-four, Arthur Alexander Banks departed this life. Along with his parents, he was preceded in death by sisters, W. Eura Scott, Emma L. Givens, and brothers, Vanderbilt, Abraham, Chauncy and Simon Banks. He leaves to cherish and honor his legacy: one son, Otto Von Banks of Harrisburg; stepson, Rychie Taylor of Reading, PA; his companion of thirty years, Delores Taylor of Reading; two stepdaughters, Gina Taylor, Toni Palmer; ten grandchildren, nieces, nephews and a host of other relatives and friends. SERVICE WILL BE HELD AT A LATER DATE AT THE DISCRETION OF THE FAMILY. FAMILY AND FRIENDS ARE ENCOURAGED TO CLICK ON THE SHARE A MEMORY TAB TO POST VIDEOS, SHARE MEMORIES, CONDOLENCES, REFLECTIONS OR SIMPLY YOUR NAME ALLOWING THE FAMILY TO KNOW YOU ARE THINKING OF THEM.

The family of Arthur Alexander "Otto" Banks created this Life Tributes page to make it easy to share your memories.

Send flowers to the Banks family.