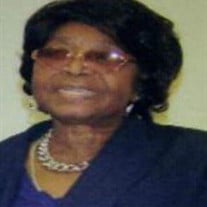 Annie B. Staff was born Saturday, September 22, 1934, in Fairfield, South Carolina, daughter of the late Charles Wallington and the late Annie Murphy Wallington. She retired from the Crowne Plaza Hotel and was a member of Macedonia Missionary... View Obituary & Service Information

The family of Ms. Annie B. Staff created this Life Tributes page to make it easy to share your memories.

Send flowers to the Staff family.