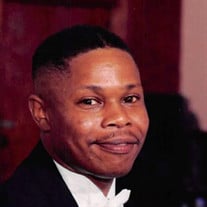 Allen Nolan Anderson Sr. was born on March 29, 1962 to the late Nolan Allen Gibbs and Louise Amy Anderson. He was the youngest of his mother’s three children. Allen transitioned from this life on Wednesday, March 31, 2021, at Harrisburg Hospital, Harrisburg PA. Allen was a product of Harrisburg School District, attending John Harris High School, Harrisburg, PA to complete his education. He married the love-of-his-life on July 19, 1997. He had a special unbreakable love for his wife Tonja. Allen was employed by the Commonwealth of Pennsylvania Department of General Services until he retired on October 31, 2020 with 27 years of service. He was well known and often acknowledged for his impeccably thorough work standards. He took great pride in everything he did whether on the job, in the church or in his personal life. Allen was an avid Eagles fan. He loved to shop and was always sharply dressed and well groomed. He was very friendly, outgoing and always had a smile for everyone he came into contact with. He adored his family and loved spending time with them at family gatherings, and there were always many family functions and road trips. He deeply enjoyed and looked forward to his Saturday dinners with his beloved mother, who doted on him constantly. Allen accepted Jesus as his Lord and Savior on January 13, 2008. He loved the Lord and attended church regularly, even when he wasn’t feeling well. He was a member of Faith Temple Holiness Church of God in Harrisburg, PA where he was the Devotional Leader of Testimony Service and assisted with the Kitchen Ministry and Pastor’s Aide. Allen was preceded in death by his father, Nolan Allen Gibbs; his father-in-law, Bishop Milton A. Thompson Sr.; his maternal grandparents, Edward Marlin Robinson and Willa-Mae Polston; his uncle, Edward L. Polston Jr.; and his brother-in-law, Keith Thompson. He leaves to mourn his transition his devoted wife, Tonja Michelle Anderson; his mother, Louise Amy Anderson; his children, Marquita Lewis, Jestin Lewis, Allen Anderson Jr., Treshawn Anderson and Dwayne Jackson Jr.; god-daughter, Ashley Thompson; sister, Jean Morrow; brother, Eugene Anderson Jr.; aunt, Ernestine Robinson; mother-in-law, Rev. Susan M. Thompson; sisters-in-law, Toni Thompson-Burnett (Richard), Hope Thompson and Faith Thompson (Daryl); brothers-in-law, Michael Thompson and Milton Thompson Jr.; 9 grandchildren, Myron, Jayon, Zaire, Keyare, Royalty, Ky’Vione, Antron, Jestyn and Jessielle; and a host of nieces, nephews, cousins and friends. FAMILY AND FRIENDS ARE ENCOURAGED TO CLICK ON THE SHARE A MEMORY TAB TO POST VIDEOS, SHARE MEMORIES, CONDOLENCES, REFLECTIONS OR SIMPLY YOUR NAME.

Allen Nolan Anderson Sr. was born on March 29, 1962 to the late Nolan Allen Gibbs and Louise Amy Anderson. He was the youngest of his mother&#8217;s three children. Allen transitioned from this life on Wednesday, March 31, 2021, at Harrisburg... View Obituary & Service Information

The family of Allen Nolan Anderson Sr. created this Life Tributes page to make it easy to share your memories.

Send flowers to the Anderson family.