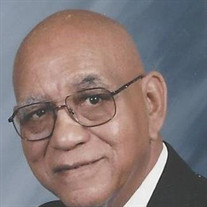 ~~~~~~~~~~~~~~~~~~~~~~~~~~~~~~~ “For God so loved the world, that he gave his only begotten son, that whosoever believeth in him should not perish, but have everlasting life.” John 3:16 ~~~~~~~~~~~~~~~~~~~~~~~~~~ Alfred Frank “Sarge” Thompson, the tenth of twelve children of the late Clarence Thompson and the late Eula Patterson Thompson, was born December 25, 1937, in Cinderella, West Virginia. In 1944, the family relocated to Washington, DC, where Alfred received his formal education in the Washington, DC, School District and graduated in 1956. After graduation, he enlisted in the United States Army where he served his country honorably for twenty-three years. In 1978, he moved to Harrisburg, PA, and in 1979, he began his government career at the former New Cumberland Army Depot retiring after twenty-two years as a Warehouseman. Alfred received numerous outstanding awards for his hard work and dedication. He also worked part-time for IBM, Inc., for one year. On May 28, 1983, Alfred united in holy matrimony with Barbara J. Thompson. God blessed Alfred and Barbara to share thirty-four years, ten months and thirteen days together. On December 13, 2015, Alfred became a faithful member of McLamb Memorial Church of the Living God under the leadership of Pastor Elista Waters. He served on the Usher Board, assisted the Missionary Board, assisted in purchasing supplies for the church, assisted the Treasurer as well as provided transportation of church members as needed. He was an active and good neighbor in his community never hesitating to help elderly couples in need. Alfred was an affectionate and loving husband, father, grandfather, great-grandfather, and especially “Pop-Pop.” However, he was known as “Sarge” and many more names. He had a wonderful personality, loving spirit and smile. He exemplified, “A Man of Principle and Valor.” An avid fisherman and Washington Redskins fan, he also enjoyed cooking, traveling, word searches, music, reading his Bible and attending church. On Tuesday, April 10, 2018, at eighty years of age, in the peace and love of his Rolleston Street home, Harrisburg, PA, Alfred transitioned from this life into eternal life. Along with his parents, he was also preceded in death by his daughter, Michele Thompson, four brothers and five sisters. Alfred leaves to honor and cherish his legacy of faith, love and dedication his devoted wife, Barbara J. Thompson; his children, Ginger Thompson, Mary F. Green (Stephen), Dee Ferguson-Lake, Najee Ferguson (Constance) and Katina Ferguson; his grandchildren, Brandon, Brock, Autumn, Sydney, Kar`meisha, Jael, Leah and Conrad Jr.; great-grandchildren, Bryson, Harper Michele and Grayson Michael; godchildren, Samyerra, Ashley and Javon; sister, Marion Alston; brother, Fred Thompson; and a host of nieces, nephews, extended family members, church family and friends. Giving God all Glory, Honor and Praise, Lovingly Submitted, The Family

The family of Mr. Alfred Frank Thompson created this Life Tributes page to make it easy to share your memories.