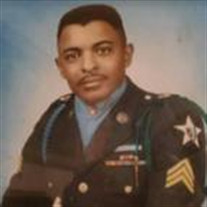 Albert J. Davis was born Friday, January 16, 1931, in Birmingham, Alabama, to the late Rosa L Glenn. He began his elementary education at Montgomery County Training School in Waugh, Alabama. In 1940, he joined St. James Baptist Church in Waugh, Alabama, and was very active in the activities of the church. In 1950, he attended George Washington High School in Mount Meigs, Alabama. During his junior and senior high school years, his extracurricular activities included softball and basketball. He was appointed Captain of his basketball team. Albert was also Vice-President and President of his class in junior and senior high school. Albert joined the Army Reserves in 1950 while still in high school. He completed his basic and advanced training in Fort Benning, Georgia, until he was called to active duty. At the beginning of the Korean Conflict, he served voluntary tours of duty in Korea from 1951 to 1953 and two additional tours thereafter. After the Korean Conflict, he decided to make the Army his career. During his twenty-two years in the military, he attained the rank of SFC (E-7); he served in Japan, Canal Zone-Republic of Panama and two voluntary tours in Vietnam. While serving in Panama, he met and married his beautiful wife, Willimina Gordon-Davis. During his military service, he received numerous Letters of Commendation. He was awarded two Bronze Stars for Meritorious Service and Achievement while serving two voluntary tours of duty in Vietnam. After his final tour of duty in Vietnam, Albert was assigned as Chief Enlisted Advisor to the 378th Supply Service Battalion Army Reserve Unit located at Fort Indiantown Gap Military Post. While assigned to this unit, he also received one Army Commendation for Meritorious Service for his loyalty and support for his persistent efforts to further the objectives of the United States Army Reserves. After retiring from the Military, Albert attended Harrisburg Area Community College. He retired from the Military on November 1, 1972, and the following day, he began working for the Commonwealth of Pennsylvania, Department of Corrections. He received numerous certificates and letters of appreciation for various outstanding duties performed. After his retirement from the Department of Corrections, he began working part-time for nine years at the Pennsylvania Lottery Headquarters in Middletown, Pennsylvania. He was a member of The First Baptist Church of Steelton, Harrisburg, Pennsylvania, where he served as a Trustee and assisted with numerous church and community activities. Albert joined the L.C. Williams Masonic Lodge No. 291, Prince Hall of Waugh, Alabama, in 1951. In 1978, he became a member of Chosen Friends Lodge No. 43 located in Harrisburg, Pennsylvania. He served as Junior and Senior Deacon, Junior and Senior Warden and as Worshipful Master from 1984-1985. His other Masonic affiliations included being a member of Nimrod Consistory No. 9 where he served as Most Wise and Perfect Master of the Rose Croix, a Companion of The Holy Royal Arch Harris Chapter No. 26. He was a Noble of Himyar Temple No. 17 Ancient Egyptian Arabic Order Nobles Mystic Shrine of North and South America and its Jurisdiction, Inc. He was a very active member in all his fraternal organizations. In 1991, Albert was elevated to 33 Degree at Scottish Rite United Supreme Council in Minneapolis, Minnesota. He was a member of the Commander of the Rite 33 and a lifetime member of the American Legion and the Veterans of Foreign Wars Post 250. He served as an Instructor for the School of Instructions since 1986 to the current day of his passing. On Thursday, November 4, 2021, Albert transitioned from time to eternity. He was preceded in death by his son, Clinton E. Davis of Waugh, Alabama, and two brothers. Albert is survived by his loving wife of fifty-eight years, Willimina Gordon-Davis; sister-in-law, Mavis Griffith; and a host of nieces, nephews, cousins and friends. FAMILY AND FRIENDS ARE ENCOURAGED TO CLICK ON THE SHARE A MEMORY TAB TO POST VIDEOS, SHARE MEMORIES, CONDOLENCES, REFLECTIONS OR SIMPLY YOUR NAME. CLICK ON THE PHOTOS & VIDEOS ON-LINE STREAMING OF SERVICE TAB OR MEDIA TAB (MOBILE) AND TRIBUTE WEBCAST TO VIEW SERVICE.

The family of Albert J. Davis created this Life Tributes page to make it easy to share your memories.